Mightydrinks
Writer and expert1 year ago

Spirulina is an organism that exists in water. It’s actually a type of bacteria that comes from blue-green algae in fresh and saltwater. This cyanobacteria is capable of producing its own energy through photosynthesis — the same process used by plants.

But don’t be fooled; spirulina isn’t the latest in a long line of fad superfoods. This highly nutritious food was popular among the ancient Aztecs. And it has been used by NASA astronauts for decades.

In case you’re not yet convinced by the nutritional value of spirulina, we’ve put together a list of the superfood’s most impressive health benefits. Forget about the ‘right stuff’, this is more like the ‘green stuff’.

Spirulina is a natural antioxidant. Antioxidants can stop oxidative damage to your cells and DNA, so they’re an essential part of any diet. The active component at work is called phycocyanin — the substance that gives spirulina its blue-green tint.

Chronic inflammation is linked to a range of serious health issues, including heart disease, arthritis, ulcerative colitis and cancer. Fortunately, phycocyanin inhibits the production of the molecules that cause inflammation and fights so-called free radicals in your body. A diet rich in antioxidants can make you less susceptible to many of the health conditions linked to chronic inflammation.

There is evidence that spirulina can alleviate many of the symptoms related to allergic rhinitis. One study revealed that giving people with the condition two grams of spirulina per day significantly reduced many of the main symptoms, such as nasal congestion, sneezing and nasal discharge.

When it comes to an all-round superfood, spirulina is one of the best. Just a tablespoon of the stuff in its powdered form can give you as much as four grams of protein and 11% of your recommended daily allowance of vitamin B1. Spirulina is also a rich source of vitamin B2, copper, iron, potassium and magnesium.

What makes spirulina such a great superfood is that it’s packed with vitamins and minerals yet it contains very few calories and carbs. And if that’s not impressive enough, it’s rich in the essential fatty acids we need for a healthy cardiovascular system.

If you’re new to veganism and you’re looking for a like-for-like replacement for eggs (in terms of nutrition), spirulina is one of the best options around.

High blood pressure is one of the root causes of many serious ailments, including kidney disease, heart attack and stroke. Research has shown that a relatively large dose of spirulina per day (at least 4.5 grams) may be enough to reduce particularly high blood pressure.

Scientists believe that the presence of spirulina boosts the body’s production of nitric oxide — the chemical that regulates the relaxation and dilation of your blood vessels.

As spirulina is a good source of antioxidants, its anti-inflammatory properties may help to reduce the chances of developing cancer. The active ingredient is phycocyanin, which is the pigment in spirulina that gives it its beautiful colour.

According to WebMD, this protein not only reduces inflammation, but it can also block the growth of cancer cells. There is also evidence to suggest spirulina boosts the human immune system — helping people to fight cancer more effectively.

Spirulina has earned its rightful place as a fully-fledged member of the ‘supergreens’ group of foods. That’s why it’s used in our great Mighty Human protein powders.

What is Pea Milk? 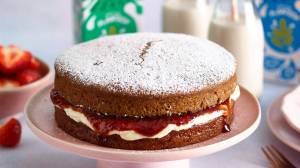